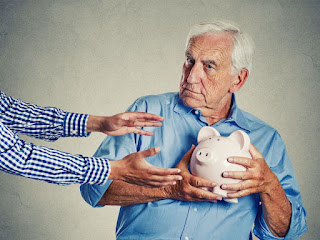 One of our major concerns is the impact of the Deferred Sales Charge (DSC) mutual fund on clients, especially vulnerable seniors.


A  Dec. 2015 report from the regulator of mutual fund dealers identified several problematic practices, including: clients over age 70 that were sold DSC funds ( aka back-end load); clients who were sold funds with DSC redemption schedules that were longer than their investment time horizon; and evidence of poor disclosure of the redemption fees at certain firms. The report stated “Overall, there was a lack of consistency across [dealers] on how to supervise transactions involving seniors who purchased DSC funds.”.


A DSC sold fund pays a 5% sales upfront commission to a dealer/advisor when a purchase is made. This structure creates many conflicts-of-interest that can skew the recommendations from advisors to the detriment of elderly clients. DSC sold funds carry significant penalties if they aren’t held for 6 years. Ready access to investments is important for retirees living on fixed income in case of an emergency.The DSC fund also glues clients to their salesperson even if service is mediocre. Mutual fund salespersons are not required to act in the client’s best interests.


We’ve seen cases where seniors are exploited by salespersons that keep them locked into underperforming funds for long periods of time. The underperformance directly reduces their retirement income security and limits their choice of funds.


When a fund company unilaterally decides to shut down a fund, unitholders must either switch to another fund in the same family and possibly incur an up to 2% switch fee or redeem with a penalty and crystallize unplanned capital losses or gains. It’s like being between a rock and a hard place.


We’ve even seen cases where retirees were sold Canadian money market Funds intended for short term parking of cash sold on a DSC basis. That is beyond exploitive.


And then there’s fund churning that causes a lot of early redemption penalty fees to be incurred. In a number of well documented cases , unethical advisors will recommend redeeming a mutual fund as soon as the redemption schedule expires and buy a new fund ,starting the dreaded redemption schedule all over again. A lack of liquidity is exactly the opposite of what retirees need.

The penalties are bad enough but in a RRIF they cannot even be offset against income. Any early redemption penalty fee paid is money lost in the RRIF (or RSP) forever.


Finally, even when an investor passes away, the DSC still applies, leaving beneficiaries a big headache - it is like a cancer that won’t go away.


An attempt by Securities regulators to ban the sale of such toxic funds is being vigorously opposed by some members of the mutual fund industry. Investor advocates want to protect investors by limiting access to the DSC option because it pays an outsized upfront commission to the dealer/ salesperson than other sales options, and a lower continuing commission for service to the client. Paying for advice well in advance of the provision of services is not smart especially if the advisor leaves the firm or retires.


Accordingly, there is not one consumer or investor advocacy group in Canada that supports the retention of the DSC sold mutual fund.


Here's what you can do:


·         Buy a fund from a reputable fund company that has discontinued selling mutual funds on a DSC basis – these include Investors Group, Dynamic Funds and BMO Investments Inc. among several others


For more information visit http://www.canadianfundwatch.com/search?q=dsc+
The DSC Sold Fund Under the Microscope


If you want a real world education on advisor exploitation of seniors, read this
Classic Case of elder abuse and DSC sold Funds .It’s a MUST READ for every senior and retiree http://www.iiroc.ca/Documents/2012/3cb46f19-f9fc-4fbe-8e88-584c5337f054_en.pdf


One way to avoid all this complexity and expense is to consider using a robo-advisor.